More than 1,000. That’s the number of new students in kindergarten through eighth grade that Catholic schools in the greater Twin Cities metro area welcomed this fall. The system-wide enrollment increase is a result of years of hard work that positioned Catholic schools to meet families’ needs amid the COVID-19 pandemic.

On the heels of last spring’s statewide school shutdown, families spent the summer waiting for the governor and school districts to announce plans for the 2020-21 school year, many of which included hybrid schedules and distance learning. Meanwhile, Catholic schools announced in June plans to return to class in person. As each school devised safety and preparedness plans, parents welcomed the stability of in-person learning. Word quickly spread in neighborhoods, churches and on social media, and phones began to ring in Catholic schools across the Twin Cities metro area. 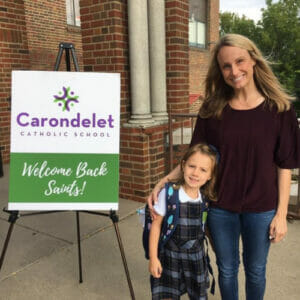 But it wasn’t just the quick response to the pandemic that drew families to Catholic schools. Brian Ragatz, president of the Catholic Schools Center of Excellence, a nonprofit that supports all 79 preschool-eighth-grade Catholic schools in the Archdiocese of St. Paul and Minneapolis, said the enrollment increase is not just a result of Catholic schools committing to in-person learning.

“So many new families flocked to our Catholic schools because of the successes our communities experienced and talked about during the pivot to distance learning last spring,” he said.

“So much of what we’ve done with admissions and enrollment primed the pump for this to happen the way it did,” said Annemarie Vega, CSCOE’s director of enrollment. “Changing schools is not easy, and even with the pandemic, it’s not something families take lightly. This was an opportunity for families who always wanted to check us out to tour buildings and see what we were all about. Now we are hearing many say they wish they had come sooner.”

Becky Kennedy, principal at Our Lady of the Lake Catholic School in Mound, where enrollment has increased 20%, hears those comments from new families.

“A parent called me and said, ‘I can’t believe we waited this long’ to switch,” Kennedy noted. “Parents who have transferred their children are happy, and they are impressed with the education their kids are receiving. Even after the newness of the first weeks of school have worn off, their kids are still excited to be coming.”

Over the summer, Catholic schools developed virtual tours to give prospective families a personalized experience, and dedicated staff to ensure they received the attention they deserved.

“It’s been great to see new families witness the beauty of Catholic school, and see our existing families welcome them,” said Kassie Ricke, advancement director at Our Lady of the Lake.